Generally speaking the double-flowered varieties of HBA have a very good shelf life anyway, according to Jan ten Brinke of HBA. The results that the new double-flowered Florencia and Finya show in the shelf life test support his claim. Florencia is a mophead hydrangea with white, double flowers. Finya, a lacecap hydrangea, is a beauty to the eye because of the double, star shaped flowers

Fay and Ice Boy also score remarkably well in the test. Fay is a strong hydrangea with flowers that change from pink tot light green. Ice Boy stands out for its pure white flowers.

In addition to the new varieties, some well known HBA varieties were included in the shelf life test, such as Jip, Caipirinha and Hot Red. A short video in which Jan ten Brinke discusses the results of the trial can be seen on the youtube channel of Agriom.

HBA started the shelf life trial at week 8 (end of February 2021) over a six week period. The test room at Agriom in De Kwakel complies with the protocol for shelf life tests in terms of light, temperature (20⁰C) and moisture (the plants were watered every other day).

For details about the shelf life test or for specific questions, please contact jan.ten.brinke@agriom.nl,
+31 6 5582 6262. 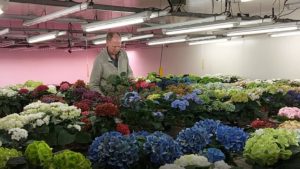 « Back to news overview